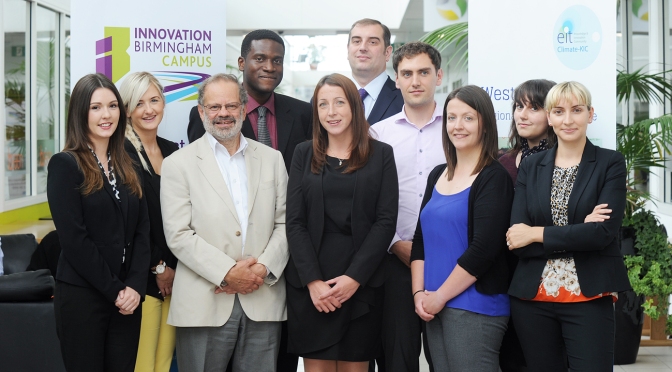 Innovation Birmingham has doubled the size of its Climate-KIC team to 10 professionals. The team now receives over £1million per annum to deliver the Low Carbon Accelerator, Pioneers into Practice exchange programme, CleanLaunchpad and other outreach projects to drive the low carbon economy.

The five new recruits are Catherine Shelley, Ben Onyido and Suzanne Coles who have joined the team from roles at Birmingham City University; Ian Willetts, who was formerly the chief executive of Walsall Voluntary Action; and Claire Spencer who previously worked for The Energy Saving Co-operative.

The Innovation Birmingham Campus is one of six locations across Europe that operates as a Climate-KIC Regional Innovation Centre. Together with a further six National Centres, the collection of European-wide climate-change initiatives are delivered from each location, with awards and grants for the best low carbon start-ups presented at a three-day annual Innovation Festival, hosted by one of the centres. Birmingham has been selected to host the Climate-KIC Innovation Festival in October 2015, which will generate over £250,000 for the local economy.

Councillor Lisa Trickett, Cabinet Member for Green, Smart and Sustainable City said: “Delivering low carbon targets for the city is a high priority for Birmingham. The work of Innovation Birmingham’s Climate-KIC team is vital to promoting the challenges and opportunities, and nurturing a cohort of over 50 local low carbon entrepreneurs and innovators every year. Across the UK, there are only two Climate KIC Centres – being London and Birmingham.

“Birmingham City Council is currently leading a group of eight cities on the Transition Cities project, which aims to demonstrate how cities can develop effective low carbon clusters in energy, buildings and mobility, and develop challenge-led, outcome-focused programmes to maximise the impact of low carbon activity.”

Catherine Shelley has been appointed as Innovation Birmingham’s Climate-KIC Programme Development and Delivery Officer; Ian Willetts is the Outreach Programme Development and Delivery Officer; Ben Onyido is the Education Programme Coordinator; Claire Spencer is the Programme Delivery and Community Officer for Low Carbon Networks; while Suzanne Coles has been appointed as the Project and Finance Assistant. In addition to the new recruits, Entrepreneurs in Residence work alongside the in-house team to mentor each low carbon start-up and provide access to investment finance and commercial opportunities.

During July, £100,000 of initial investment cash was awarded across the top nine start-ups on Innovation Birmingham’s Low Carbon Accelerator programme. The grant funding – circa £11,000 for each of the nine start-ups – is being used to pay for research and development, and other activity to enable the low carbon products and services to be launched to market in an accelerated timescale.

At this year’s Innovation Festival, held in Valencia in late October, two of Innovation Birmingham’s CleanLaunchpad start-ups were awarded the second and third overall prizes, illustrating the quality of the local cohort.

Katharine Fuller, Innovation Birmingham’s Senior Project Manager for EU Projects said: “Having the full team now in place is great news, as it means we can ensure the benefit of Climate-KIC’s Regional Innovation Centre resources can be fully maximised.

“With this project being run by Innovation Birmingham, there are many further benefits to all those on our various climate-change programmes, as they are able to interact and collaborate with the tech entrepreneurs on the parallel Entrepreneurs for the Future programme. There is no other centre across Europe that is able to offer peer to peer mentoring on such a wide scale.”

Want to know what the Smart City Commission is talking about? Click here to find documents from their meetings

A place to share ideas and developments for a Smarter Birmingham

Are you already doing something that makes Birmingham a Smart City? Or do you have something you really want to put on the blog? Tell us what you are already doing via our simple form, or drop us a email to smartbrum@gmail.com